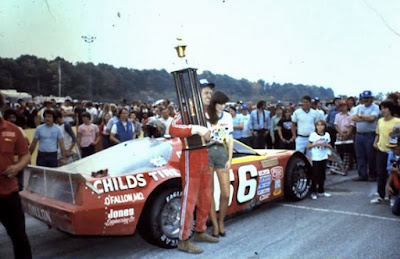 Winchester, Ind. (October 3, 1982) – Early accidents Sunday at Winchester Speedway reduced the 13th annual Winchester 400 stock car race to an endurance event won by Rusty Wallace of Fenton, Mo., a guy who did not even want to be here in the first place.

An overflow crowd of more than 6,000 took advantage of warm, dry weather and saw lots of early action.

“It’s all luck,” Wallace said of running on Winchester’s half-mile high banks and the 26-year-old made his won as he evaded countless accidents (the caution flag flew 13 times for 96 laps) to win his first-ever Winchester 400.

It was his first appearance in the October classic, and only his second race at Winchester.

The only reason Wallace came back was that he couldn’t get motel reservations in Mobile, Ala., for an All-Pro stock car race on Sunday.

But Wallace showed up, gritted his teeth, stayed out of trouble, and collected $9,800 for his troubles.

Wallace finished the 400-lap chase three laps ahead of pole-sitter Bob Strait of Flossmoor, Ill., and nine laps ahead of third lace Alan Kulwicki of Milwaukee, Wis. Both Strait and Kulwicki had problems that took them out of contention.

Wallace had no mechanical issues, but he was on the verge of being out of contention until lap 325. At the time, he was a lap plus some 100 yards behind race leader Mike Eddy, who was threatening to win his second consecutive Winchester 400 in a runaway.

A car driven by John Wilson spun on the backstretch in front of Eddy, leaving nowhere for the Midland, Mich., driver to go. Eddy’s Camaro hit Wilson’s spinning car, rode up over the front end and threatened for a time to get upside down. It came upright and slid into the dirt bank on the inside of the backstretch. Eddy was unhurt.

From there, all Wallace had to do was keep him and his car out of trouble, which wasn’t difficult since the field was reduced to 14 cars at the halfway mark and only nine cars running at the finish.

Wallace, a sometimes NASCAR Winston cup competitor, said one of his concerns at Winchester was fatigue.

“I had a neck strap on my helmet and an arm strap and everything,” he said. “but I didn’t get tired. I ran at Bristol (Tennessee) in a 250-lap race and was ready to fall out of the car I was so tired.”

It wasn’t a race for front-runners. Dick Trickle, who took the lead from Bob Strait at the start, held the top spot for 50 laps before Eddy passed him. Soon after that, Trickle slowed and came to the pits with a broken throttle. By the time it was repaired, he was a dozen laps behind.

Five-time Winchester winner Bob Senneker, running second to Eddy, broke a piston on lap 103. Kulwicki moved up to second, but he slowed right before the halfway point. He spent several laps in the pits with handling and overheating issues but returned and finished a distant third.

Strait had to call for relief from Doug Klein just past the halfway mark. Strait, who had been ill all week with intestinal flu, returned to the car late after Klein had brought it up to second.