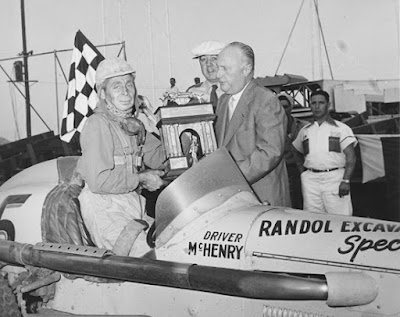 Birmingham, Ala. (October 10, 1953) – A Kansas City driver, who has been driving big cars on the national dirt track circuit for only two years now, won the 20-lap feature event at the Alabama State Fair on Saturday afternoon.

Driving the Tom Randol Offenhauser, Vito Calia, a veteran on the midget circuit, finished half a lap ahead of Bobby Grim of Indianapolis in the time of 10 minutes and 16 seconds on the tight half-mile paved oval.

For his performance, Calia won the first Presidential Trophy to be presented on the International Motor Contest Association circuit, with Alabama State Fair manager R.H. McIntosh making the presentation.

There was only one accident during the afternoon when Buzz Luce of Coon Ridge, Ky., spun out of control in the third heat and jumped 15 feet into the infield.

Jimmy Campbell of Bates City, Mo., the defending National Speedways, Inc., champion, did not compete in the feature event because of mechanical failure.