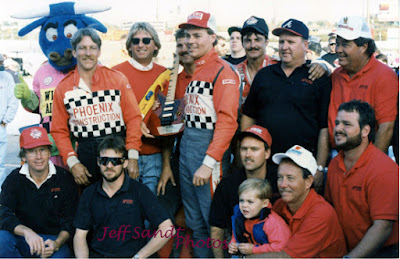 Jeff Purvis celebrates with his pit crew after winning the All-American 400 at Nashville.

“It’s a whole different feeling,” said the 33-year-old Purvis, who won the 12th annual event by several car lengths over Michigan’s Bob Senneker before an estimated crowd of 12,000.

“Last year it was just awful, just waiting to see what was going to happen. At least this time I’m leaving the track knowing the outcome.”

Last year, Purvis was announced as the winner but shortly afterwards race officials said illegal weights had been found in his car and nullified the victory. Two days later, that decision was reversed, and Purvis was re-instated as the winner.

Jody Ridley won the All-Pro Series championship by one point over Bobby Gill. Gill had taken a 11-point lead over Ridley entering the race but was involved in a crash and finished 10th, Ridley finished seventh, just high enough to nudge Gill.

Purvis said he also received a “nudge” on his way to his fifth All Pro victory of the season. He was caught up “right in the middle” of a 13-car crash on lap 259 but made it though without a scratch.

“Someone nudged me from behind and I somehow made it through. I’m still not sure how.”