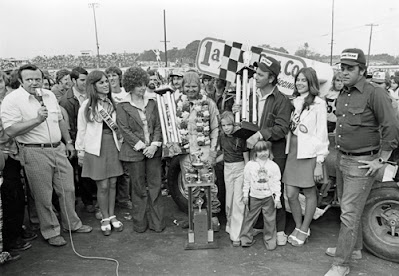 Bobby Allen is surrounded by well-wishers after winning the 1975 National Open at Williams Grove.

Mechanicsburg, Penn. (October 5, 1975) – For the second year in a row, a Hanover, Penn.- based driver has emerged victorious in the National Open for sprint cars at Williams Grove Speedway.

Bobby Allen, a runner-up finisher three different times, won the 13th running of the 150-lap encounter by taking the lead with only six laps to go and pushing his M & J Coal Co. Special to a 2.5-second advantage over Kramer Williamson, who led more laps than any other driver.

It was Allen’s initial Grove success of 1975. In fact, he had not won on the highly competitive area sprint circuit since back on June 21 at Lincoln Speedway.

By virtue of his fast time of 24:001 seconds which won him the Shorty Emrich Memorial Trophy, an award honoring his former car owner who died this summer, Allen started on the pole and jumped out to an early lead.

However, he gave way on the 25th lap to Smokey Snellbaker, winner of 10 Grove features this season and the pre-race favorite.

Snellbaker, who started 14th but wasted no time in ripping past the traffic. Lynn Paxton and Williamson were leaders through the midway mark as Allen fell off the pace.

“We set up for a slick track,” Allen disclosed, “and the car didn’t start working until the end of the first 75 laps.”

When the race was halted for the mandatory fuel-up, Allen was running fourth with Williamson in the lead. On the restart, Allen quickly got past Fred Linder and immediately moved in on Paxton and Williamson, who were dueling for top spot.

On the 103rd lap, Paxton got high in the first turn as he went for the lead and Allen, his former teammate under the Emrich banner, slipped underneath him.

Allen gained a brief lead on the 127th lap but Williamson, who drove an outstanding race after starting 22nd, got it back coming off the fourth turn and opened a 1.5-second margin.

Allen refused to give up, and by the 140th lap he was back challenging. After several attempts at both ends of the half-mile oval, he assumed command moving off the second turn on the 144th lap.

Allen finished with a time of 1 hour and 11 minutes and 21 seconds, just off the track record.

Allen had been second to Johnny Grum in the 1970 National Open, second to Kenny Weld in 1973 and second to his Hanover buddy, Stevie Smith, last year.

Paxton wound up third. It was Paxton who had the lead on the 41st lap when Snellbaker lost his steering and crashed into the third turn fence.

During the first 75-lap segment, 19 drivers were on the same lap. At the finish, only three had completed 150 circuits.

Dick “Toby” Tobias ran with the leaders most of the afternoon and placed fourth ahead of Linder, one of the few “outsiders” to crack the lineup.