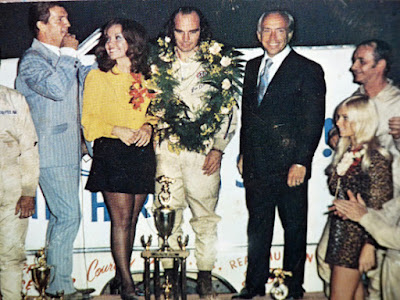 Phoenix, Ariz. (October 9, 1971) – When everything possible had happened to slow down racing during the fourth annual Western United States Sprint Car Championships at Manzanita Speedway on Saturday night, nothing was able to slow down winner Jan Opperman.

After being involved in a first lap, nine-car pileup that apparently did no damage to his car, Opperman clearly showed why he is the national sprint car champion.

Running third behind pace-setter Buddy Taylor and second place running Bob Huebner, Opperman gobbled up both of them in one swift move going into turn three on the 44th lap.

Once into the lead, the 31-year-old “hippy racer” was never threatened in his Phoenix-based “Ruggles Twister,” the car that Huebner drove to the 1969 Western Championship. Huebner had just switched from the Twister to the Quality Dry Wall #1 last month.

Taylor had led from the second to the 44th lap after starting on the outside front row. The other front row starter, Bob Moore, had shock absorber problems in his Phoenix Roadrunner Special and had to drop back.

Huebner moved into the second spot on lap 18 and stayed there until Opperman’s dramatic move for the lead. Gene Brown joined Taylor and Huebner to make it a near-blanket finish behind Opperman.

Marty Kinerk, now racing out of Tucson, rounded out the top five finishers.

Opperman thanked Huebner for several pointers on the Twister after the race. “He really helped me a lot. I was real pleased with the handling of the car,” Opperman said. “They really know how to race good here – about the best in the country.”

And it was Opperman who said, “You really haven’t won anything until you won the Western.”