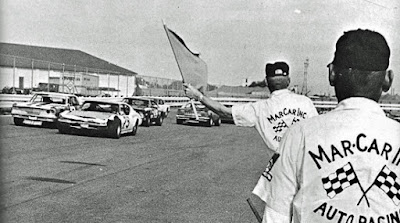 A Mar-Car, Inc., official gives the green flag to polesitter Larry Phillips (75) for the 50-lap IMCA stock car feature at Shreveport. Phillips would go on to win the event. – Bill Causey Jr. Photo

In winning the feature, Phillips broke the 50-lap world record with a clocking off 18 minutes and 11.02 seconds, erasing the old mark just set last Saturday by Phil Cronin of Houston, Tex.

Phillips also cracked the world mark for 12 laps by posting a time of 4 minutes and 28.26 seconds in winning the first heat. The old marks were also set by Cronin last Saturday – 4 minutes and 29.65 seconds.

Irv Janey of Cedar Rapids, Iowa, who placed fifth in the feature and third in the fourth heat, did nothing to hurt his chances of winning his first IMCA national championship.

In the feature, Phillips was constantly at sword’s with Cronin who won the trophy dash, heat and 50-lap feature last Saturday.

From the outset, Phillips took the lead, but Cronin shadowed him and passed Phillips in front of the grandstand on lap 17.

On the 25th circuit, Phillips returned the favor and from that point on, the two drivers exchanged the lead another four times before Phillips got the lead for keeps on lap 38.