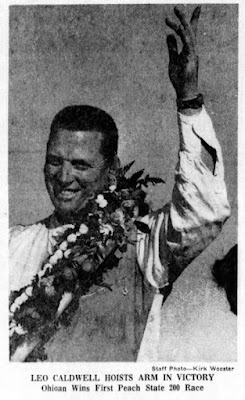 Atlanta, Ga. (October 11, 1964) – After a decision that took longer than the race, Leo Caldwell of Perrysburg, Ohio, was declared the winner of the Peach State 200, the first open cockpit race ever run at Atlanta International Speedway.

Caldwell, wheeling an Indianapolis-style roadster powered with a Ford engine, took the lead on the 94th lap, when previous leader Clare Lawicki of St. Clair Shores, Mich., made his final pit stop.

The confusion of pit stops at the end, brought by the rule of the racing calling for at least two pit stops, left the winner in doubt for nearly 90 minutes. The race itself took 1 hour, 12 minutes and 4 seconds, for an average speed of 122.038 miles per hour for the 150 miles over the mile and a half high-banked speedway.

Caldwell was talking to puzzled reporters in the press box when the officials’ results flashed from the official’s trailer. He had been answering such embarrassing questions such as, “Who do you think won?”

Credited with finishing second was Lawicki while third place, according to officials was Curley Boyd of Indianapolis.

The victory was worth about $4,200 to Caldwell, plus accessory prizes, a trophy, and a kiss from a pretty girl in victory lane.

Caldwell drove a steady race, showing up in the lead several times near the finish, but never as one of the chargers.

Frank Winkley, promoter of the International Motor Contest Association event, called it an experiment, which, if successful, might open the super speedways of the South to the open cockpits that is more popular in the Midwest.

If the success depended on the gate, it was small, with only 8,500 fans contributing towards a purse of $26,000. It depended on the reaction of the crowd; it was pleasing but puzzling.

None of the fierce wrecks occurred, as predicted by many followers of the sport. Dick Gaines of Mitchell, Ind., lost a wheel and flipped early in the race but came away unscratched. Later, Gary Calvert of Tonawanda, Ill., spun into the pit fence and was momentarily knocked unconscious.

The expected hot dog of the race, Greg Weld of Kansas City, Mo., with the fastest lap time of 157.434 miles per hour in time trials, blew his engine on lap 3 and spun down to the infield grass.

Gene Bell of Schoolcraft, Mich., won the 50-mile consolation race at an average speed of 135.498 miles per hour. Leon Wieske, a substitute driver, finished second and bob King of Muncie, Ind., was third.