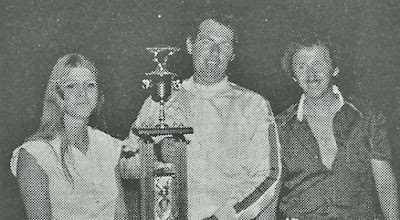 Gary Crawford traveled some distance to pick up the victory in the first round of the Super Stock Car Series in De Pere. Promoter Paul Kaczrowski is on the right.

De Pere, Wis. (July 2, 1978) – Round one of the Super Stock Car Series at Paul’s Super Speedway proved to be an overwhelming success as visiting drivers claimed the top four positions and seven of the top 10.

Gray Crawford of Independence, Iowa, one the hottest drivers in the Midwest, took advantage of track point leader Pete Parker’s misfortune and claimed the $1,000 top prize in the first of the three-race series.

Parker, who started from the pole by virtue of earlier setting fast time, took the immediate lead as Crawford followed closely for the first 15 laps when the first yellow was waved for debris in turn three.

The green flag reappeared on lap 18 with Parker able to build a quarter of a lap margin over Crawford. A spin by J.J. Smith of Appleton, Wis., on lap 38, eliminated Parker’s advantage.

The green flag waved on lap 41 for an expected dash to the finish with Parker, Crawford, Ed Sanger of Waterloo, Iowa, and Leon Plank of Mondovi, Wis., all fighting for the top prize.

On lap 45, Parker pushed his machine a bit too hard and spun in turn two as Crawford edged by for the lead. The ensuing five-lap dash to the finish was a classic as Crawford used every inch of the track to hold back the crafty veterans Sanger and Plank.

At the finish it was Crawford, nipping Sanger with Plank just inches behind in third.