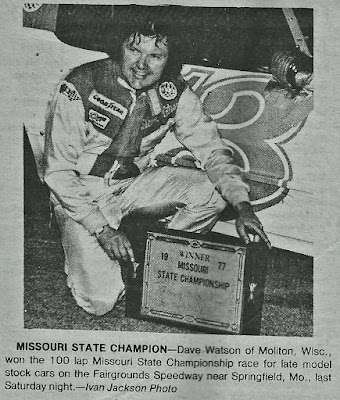 The largest capacity crowd ever at the speedway watched 24 of the best short track drivers in the Midwest go “bumper-to-bumper” with the winner taking home a large sum.

The top eight qualifiers in time trials inverted for the feature giving Watson the pole position. He would shoot out to the lead followed closely by Rusty Wallace of St. Louis and Joe Shear of Beloit, Ill.

By lap 28 Shear had moved past Wallace and snugly on Watson’s bumper with 18-year-old Mark Martin of Batesville, Ark., a tight third. On lap 54 Martin got by Shear for second and passed Watson for the top spot three laps later. Watson would tail Martin for the next 29 circuits patiently waiting to make his move.

A yellow flag would wave on lap 83 slowing the pace of the field. As the field made their “one-to-go” lap, Martin’s car lost fire on the backstretch and was pushed to the infield by his crewmen, putting Watson in the number one slot.

On the restart Watson was challenged by David Goldsberry of Bolivar, Mo., but Watson would manage to keep Goldsberry at a car length’s margin for the remaining 16 circuits.

Rusty Wallace would hang on for third while Fred Tiede of Marionville, Mo., grabbed fourth. John Foster of Odessa, Tex., would round out the top five.