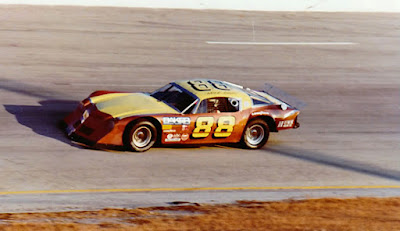 Odessa, Mo. (July 29, 1979) – Mike Eddy survived a blistering hot day and outlasted a strong field of opponents to win Sunday afternoon’s National Championship 300 for American Speed Association Circuit of Champion late models at I-70 Speedway. Eddy collected $3,575 for the win, which was his third of the season.

Eddy grabbed the lead for the final time by passing Mark Martin on lap 276, when the Batesville, Ark., youngster was forced to the pit area with a punctured right rear tire and lost over a lap to Eddy in the process.

Martin returned to the track and managed to un-lap himself in closing stages of the event, but was still nearly a full lap down when he crossed the finish line to claim runner-up honors. Rusty Wallace, in his first ASA start of 1979, finished third, one lap down, and was followed by Randy Sweet and Mike Opperman.

Young had put on one the most spectacular driving displays of the year by charging from his 13th starting spot to take the lead before a tightening engine caused him to call it a day at the halfway point.

Bad luck was particularly bitter for Don Gregory, who was forced to retire with third place all but sewn up. A broken rod forced Gregory to the pit area on lap 247 and he would finish 12th.

Bivins grabbed the early lead and was being pressured by Sweet and Senneker. Bivins would get tangled up with a lap car giving the lead to Sweet, only to give it away to Senneker on lap 58.

Young blasted ahead of Senneker on lap 92 and led until a rash of pit stops occurred under a yellow flag on lap 124.

For the most part, Martin then led until the final caution period on lap 211. The caution sent everyone to the pits for what figured to be the last time.

Eddy emerged from the pit area on top, but Martin ran him down on lap 234 and remained in front until misfortune struck on lap 276.

Making his debut in ASA circles was veteran John Martin. Driving a car owned by his brother Bob, Martin was eliminated after only 41 laps due to insufficient ventilation in the car. He officially finished 29th.