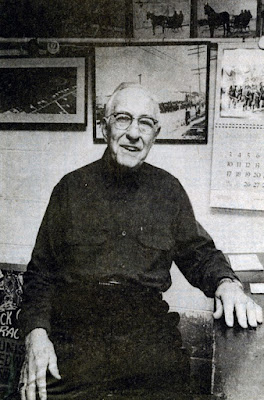 Tunis Speedway, located on Highway 218 in western Waterloo - an area called Cedar-Loo because of its proximity to adjacent Cedar Falls — is the oldest operating stock car track in Iowa.

The name Tunis has become synonymous with stock car racing in eastern Iowa but that wasn’t what Judd had in mind when he carved an oval half-mile track out of the back part of his 52-acre spread.

“I was raised with horses. I love ‘em. I built the track in 1947 as a place to work out my horses because I had to go all the way to Waverly to do it,” said Tunis.

When word got out about the new track, auto enthusiasts approached him about using it for midget car races. Tunis consented, and a quarter-mile track was plotted inside the half-mile oval.

“John Gerber of Davenport, who was staging midget races at Cedar Rapids and Davenport, talked me into building a quarter-mile track and we’ve been in racing ever since.”

The new, shorter, steep banked oval opened in 1949 with midget car races. The stocks came in the following year, and so did the spectators - up to 10,000 at a time.

Tunis ran the show himself for 17 years, and then contracted with a racing association to put on the weekly Sunday night races. Starting in 1973, promoter Claus Stricker of Cedar Falls has had the contract to operate the races. Tunis, however, has stayed in the thick of it.

“There are always a few little details that need tending to. Seems like someone always wants something. The other night, I jumped in and helped one of the ticket sellers,” he said.

As a boy in Waterloo, Tunis rode horse-drawn delivery wagons for fun, and later for profit ($3 a week for a local sausage-maker). It was the beginning of his education in the field of processing and marketing meat.

“I was the best wienie taster they had,” he laughed. They always made sure that I was around on the days they made wienies.”

He got into the meat business for himself in a market in the west side downtown business district here; He eventually expanded into the wholesale meat trade, selling to restaurants and stores in northeast Iowa.

Tunis later sold the retail end of the business, but he kept the wholesale trade, and moved the operation to the site he purchased in 1938 at what then was the outskirts of Waterloo. He ran the meat business put of the basement of his home until 1965,

Today, land, along the highway in Cedar-Loo, a prime commercial area is priced by the running foot. Tunis has sold off bits and pieces of his original 52 acres. He’s retained 34 acres, including the lot where Tunis and his wife, Marie, built their home in 1941.

The only stock car track to open before Tunis was one at Cedar Rapids, but it ceased operating years, ago, Tunis said, making his the longest running stock track in the state. Many of Iowa’s top race drivers were spawned at Tunis.

The best drivers, we made right here,” Tunis said proudly. “Lee Kunzman for example; look where he is now. This is where he started.”

Kunzman, 30, of Guttenberg, finished seventh in the Indianapolis 500 race in 1973, and still competes in the “big-car” racing circuit.

Many of the big names in Iowa stock car driving could call Tunis their home track, among them, Red Droste and Bill Zwanziger of Waterloo, Chub Liebe of Oelwein, Bob Hilmer and Cal Swanson of Reinbeck, Charley Moffitt, a former state jalopy titleholder from Stanwood; Bob Posekany of Cedar Falls and a Minnesotan, Mert Williams of Rochester.

“Running a race track is a lot like any other kind of business. People think that we only work on race night, but we actually work harder during the week,” Tunis said.

Adult ticket prices at Tunis are $1.50 and $2.50. Children under 12 get in free.” Lots of people couldn’t afford to come to the races if they had to pay for their kids too, or had to hire a babysitter so they could leave the kids home,” Tunis reasoned.

Two deaths have occurred at the Tunis track, but neither was connected with stock car racing. A boy died of injuries suffered when he fell from a horse he was riding on the track, and a thrill show performer was killed during his act.

“It was the Lee Overland Thrill Show,” Tunis recalled. “Some guy had an act where he blew himself up with 12 sticks of dynamite while he laid sealed in a coffin. Something went wrong that night.”

Insurance at the track costs $600 for each night of racing, Tunis said. At least $3,000 in prize money is guaranteed each race night.

The Tunis track was expanded from a quarter-mile to three-eighths of a mile in 1974. The extra eighth-mile was added, Tunis said, “Because stock car owners are coming in with autos more powerful and adapted to longer tracks.”

“Iowa is noted for its stock car racing,” Tunis said. “Right now, there are five tracks between Webster City and Dubuque in towns along Highway 20. Ours used to be the only one.”