1983 – Wolfgang’s first visit to Wilmot a good one 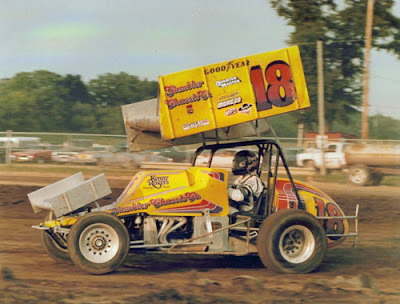 Wilmot, Wis. (July 30, 1983) – Doug Wolfgang, Sioux Falls, S.D., made his first visit to Wilmot Speedway on Saturday night a memorable and winning experience as he won top money in the second round of the J&L Gas – Wilmot Winged Open sprint car series.

His win came after Rick Ferkel, Tiffin, Ohio, lost steering in his #0 Morgan sprinter. Ferkel had started outside front row in the 20-car field for the 40-lap feature and led 37 circuits.

His departure from the race will always leave in doubt the question that Wolfgang and his Gambler #18 car could have made the winning pass in the final laps of the race.

Wolfgang had started seventh in the field but was in second by lap 10 after passing Wilmot point leader Gib Wiser of Neosho, Wis., but by then Ferkel had a full straightaway lead on the rest of the field.

That lead diminished on lap 14 when Gary Zobel of Lake Villa, Ill., dove into the infield with a flat tire just as Ferkel was making an inside pass. Contact between the cars almost sent Ferkel into a spin, but he corrected and then seemed to find an advantage by using traffic of slower cars to keep Wolfgang from getting close enough to attempt a pass. But on the 37th lap, Ferkel slowed, moved to the outside of the track and came to a stop on the backstretch, done for the evening.

The yellow came out for both Ferkel and Jim Moulis of Johnsburg, Ill., the fast qualifier for the 44-car field, who also suffered steering problems and stopped his car in the fourth turn.