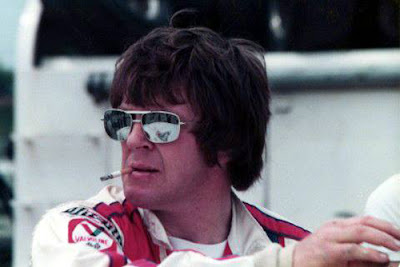 Kaukauna, Wis. (July 17, 1977) – Dick Trickle and Joe shear battled all afternoon in a fierce battle which left tire marks on the left side of Trickle’s 1977 Pontiac Firebird with Trickle winning the 55-lap feature at Wisconsin International Raceway before a crowd of 4,312.

Trickle beat Shear to the checkered flag in the second race of the Red, White and Blue State Championship Series by less than a car-length. It was the Wisconsin Rapids driver’s third straight win in Sunday afternoon special events at WIR this summer and his 38th victory overall of the season.

Shear qualified at a near-record 20.51 second lap in his Fred Nielsen-owned 1974 Camaro only to have Trickle take to the half-mile paved oval only a few moments later to qualify at 20.41 seconds, snapping shear’s 20.46 record established in May.

Slinger’s Tony Strupp took the lead in the feature in his 1973 Camaro and held on until the seventh round when Fred Bender of Sun Prairie shot past in his 1977 Camaro.

Bender led the event until lap 10 when hear motored past using the outer groove on the front stretch. Bender and Shear, a South Beloit, Ill., native, raced wheel-to-wheel for several laps before Shear eventually pulled away.

Shear built up a 12-car-length margin as Trickle and Larry Schuler of Lockport, Ill., moved through the 21-car field.

Trickle moved into third position on lap 15 and maneuvered into second on the 19th round.

The yellow flag came out on lap 21 when Freedom’s Bob Abitz spun in the first turn after oil dropped from another car onto the track.

When the green flag waved, Trickle immediately put himself of Shear’s rear bumper. The two veteran drivers raced nose-to-tail until lap 32 when Trickle powered past Shear on the backstretch.

As Trickle went past, the two speeding racers touched together briefly as Shear’s right front tire creased the side of Trickle’s white car, leaving black tire marks on the tail section.

The yellow flag reappeared on lap 34 when the engine in Bender’s car exploded on the back stretch in a ball of fire. Bender managed to wheel the car around the third and fourth turns into the pit area where the fire was quickly doused. Bender was uninjured.

The remainder of the race was a tight battle to the checkered as Shear attempted to regain the lead. Trickle skillfully held back Shear’s passing attempts to win by less than a car length.

“I saw Joe in front of me at times and behind me later,” Trickle said after the race. “I was just a little faster today.”