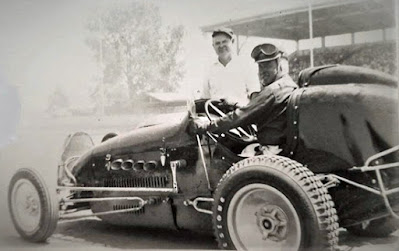 Don Branson filled in for Bobby Grim and took Hector Honores' Black Deuce to victory at Belleville.
Belleville, Kan. (July 4, 1954) - Three new records were set at the International Motor Contest Association big car races at the N.C.K. Free Fairgrounds racetrack on Independence day, which saw a crowd of 4,600 at the event.

Hot, sunny weather caused the track to be dry and Belleville’s municipal street flusher watered the track between events to settle the dust several times.

Andy Anderson, former Belleville driver, set a new N.C.K. track record for 6 laps of 2 minutes and 21.15 seconds, breaking a record set by Red Ballou here September 3, 1948 of 2 minutes and 34.45 seconds. Anderson’s time made in a King Offenhauser, also set a new IMCA. record, this being the first time the odd-distance 6-lap race has been listed in their standings, according to Moke Cosby, racing official of Davenport, Iowa.

Another record set was 10 minutes and 3.30 seconds for the 25-lap feature, won by Don Branson of Champaign, Ill., driving the Honore Offy formerly driven by Bobby Grim. This is also the first time a 25-lap event has been listed in IMCA annual for half-mile banked tracks.

Only three minor casualties occurred during the afternoon. Anderson suffered a leg burn from hot oil during the 25-lap feature but stayed in the race to place second. Don Branson received a facial cut and Bob Slater, a mashed lip from flying clods of mud during a race.

Branson held the best record in the time trials, rounding the deeply banked half-mile track in 21.69 seconds. Herschel Wagner of Independence, Mo., driving a Mocca Offenhauser turned in a 22.30 and Slater of Kansas City, Mo., in a Slater Offy, a 22.50 for second and third spots in time trials.

Jimmy Campbell of Bates City, Mo., Anderson of Hastings, Neb., Bill Burdick of Sioux City, Iowa, and Fritz Tegtmeier of Elgin, Ill., were next high in time trials by 21 cars, according to official I.M.C.A. records filed following the races.

In the first heat of 6 laps, Anderson, Branson and Slater won the money, Anderson’s time of 2 minutes and 21.15 seconds, setting the new records.

National Speedway Dash, the second heat, also 6 laps, saw Wagner challenging those records set just before by winning the heat in 2 minutes and 21.51 seconds, less than a half second more than Anderson’s time. Tegtmeier in a Grosek Special was second and Campbell came in third.

Jimmy Wegescheider of St. Louis, Mo., in an Alexander Wayne, won the fourth event 2 minutes and 27.30 seconds. Placing in the 6-lap American Triumph Dash were Bob Thompson of Indianapolis, Ind., driving a Hyneman Offy and Lee Drollinger of Urbana, Ill., in a McMeen Ranger. Wegescheider was sixteenth in time trials, Thompson fifteenth and Drollinger, eighth.

In the match race of 3 laps, officials chose Anderson, Branson and Wagner as driving the fastest cars and earning the right to compete. Anderson won the speedy 3-lap event in 1 minute and 7.60 seconds with Branson second and Wagner third.

The special event race was an Australian Pursuit of 10 laps. With nine cars entering, Lee Crass of Norman, Okla., driving a Heath Offy, copped first in 5 minutes and 11.50 seconds.

Tegtmeier, who started at the end of the single file line-up, passed all other contenders to come in just behind Crass and place second. Wally Davenport of St. Louis, Mo., at the wheel of a Scheel special was third and Eddie Loetscher of St. Louis, driving a Loetscher Offy, was fourth.

The Bell of Belleville, driven by Curly Wadsworth of Topeka, competed in this event, having placed eighteenth in the opening time trial.

I.M.C.A. lists eight winners in the feature race of 25 laps. Contenders were the 10 fastest cars of the afternoon. Branson won the last event with placers listed Anderson, Campbell, Wagner, Thompson, Drollinger, Crass and Loetscher, in that order. Branson’s 10 minutes and 3.30 seconds set a record.