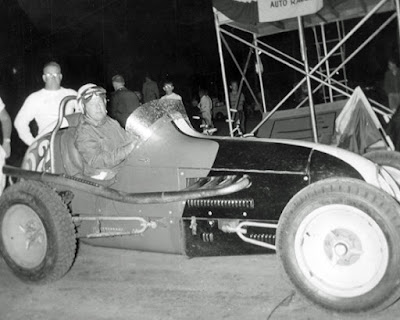 Cedar Rapids, Iowa (July 4, 1964) - Buzz Barton proved again Saturday night at Hawkeye Downs that the Offenhauser is a very lively corpse in big car racing. The lead-footed driver from Tampa, Fla., gunned his big Offy home ahead of the field to capture the 15-lap feature in the Auto Racing Inc., program.

A crowd estimated at 7,200 attended the holiday program.

Barton finished about five-car lengths ahead of thee Chevrolet conversion driven by Jerry Richert of Forest Lake, Minn., who started on the pole position after winning the first heat.

The cars ran under thee caution flag for four laps because of two spin-outs in the feature.

Jerry Daniels of St. Paul, Minn., also operating a Chevy conversion, was a close third in the feature. He had the fastest time trial, turning the half-mile oval in 23.72 seconds.

Twenty-nine cars took time trials. Because race officials took extra time to remedy the slippery condition of the west curve, the first race didn’t start until after 9:30, and it was after 11:00 before the feature ended.

A big fireworks display was touched off before the semi-main and feature races.