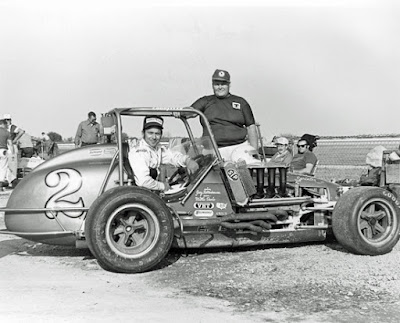 Bettenhausen had to wait through a two-hour rain delay before picking up his third straight victory on the half-mile high-banked track.

The late-afternoon thunderstorm left most of the crowd of 4,219 huddled under the roof of the grandstand awaiting the last 31 of the scheduled 40 laps in the feature.

But it was Sam Sessions of Nashville, Mich., who appeared destined for a runaway victory, who actually brought the racing to a halt.

Sessions, who leads the national point standings, had a straightaway advantage on Bettenhausen after nine circuits when he attempted to pass Leigh Bradshaw of Morgantown, Penn., when their cars tangled going into the first turn. Sessions flipped over the outside wall in the melee.

The race was stopped, and Sessions was taken to a local hospital where he was examined and released.

When the race was halted, Bettenhausen was running second with Larry Dickson in third and Rollie Beale in fourth. The rain began as Sessions was being loaded into the ambulance.

Bettenhausen was none too confident of holding the lead when the race was finally restarted. The power steering in his car, the only Ford-powered machine in a race full of Chevy’s, had failed two laps before Sessions’ wreck.

“I didn’t think I’d be able to lead it 10 laps after the restart,” Bettenhausen said later. “It steered so hard I couldn’t believe it. I ran in the middle of the track, so I had plenty of room to slip and slide.”

But he did lead the final 31 laps, and Dickson, who himself was closely pressed by Beale, could only muster one challenge. That came when pulled alongside Bettenhausen going through the second turn of the last lap.

“Beale was putting the pressure on me, so I had to try something,” Dickson remarked. I thought I had him (Bettenhausen), but he was running good.”