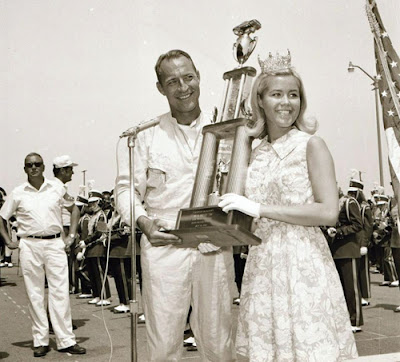 Nelson won by two seconds over teammate Jim Hurtubise of North Tonawanda, N.Y., also piloting a ‘65 Plymouth, on the one-mile asphalt track. Hurtubise, who had led most of the way collected $3,522.

Nelson averaged 90.25 miles per hour as the caution flag was raised eight times for a total of 35 miles because of minor accidents. No one was injured.

The starting field of 37 was the largest in a United States Auto Club race this season. The total purse was $26,250 plus accessories money.

A. J. Foyt of Houston, Tex., was third in a 1965 Ford and was followed across the finish line by three '65 Dodges. They were driven by Bobby Isaacs, Catawba, N.C.: Davis Pearson, Spartanburg, S.C., and Herb Shannon, Peoria, Ill., respectively.

Announcement of the winner drew mixed cheers and boos from the crowd. Nelson, leading the USAC circuit, said, “I’ve never had this many boos for winning but I'm very glad that Plymouth finished one-two.”

Hurtubise, who suffered severe burns in a big car race on the same track last year, said, “I had tire trouble at first and then my brakes went out on the 190th lap.”

Parnelli Jones of Torrance, Calif., seeking his eighth straight victory in late model stock car racing at State Fair Park, did not finish. His Mercury was disabled in a collision in the 20th lap.