1969 - McCluskey Kicks Up a Storm at Terre Haute 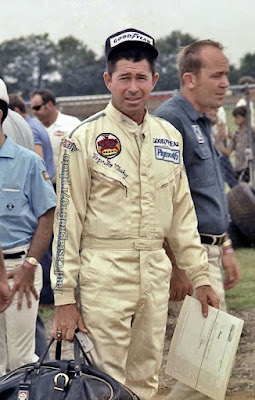 The 100-lap twilight feature was conducted under the freakish combination of “grease-slick” mud, blinding dust, and overcast sunset conditions.

McCluskey’s win, a repeat of this triumph in September of 1968, enabled him to secure a 455-point command over A.J. Foyt in the USAC Stock Car point standings. Roger was driving the only factory supported car in contention among the top six finishers that crossed starter Shim Malone’s checkered flag.

Before relinquishing the lead to McCluskey, Regeth had fended off the efforts of both Foyt and Jack Bowsher in their team of ’69 Torino's. Regeth was ultimately forced out of the lead by mechanical difficulties.

For the originally scheduled date of the event, June 22, race director Don Smith had arranged the addition of five to six inches of clay to the racing surface. When the racers arrived for the Saturday evening rain date running of the event, that new surface unfortunately appeared practically unfit for racing. Watering trucks had deposited their loads in such a manner that by practice time, lane-wide swaths of slush encircled the course.

In hopes that afternoon practice would pack the clay to asphalt-type hardness, the heavy stock cars not only churned up the heavy quagmire and also kicked up the dry, cloddy areas engulfing areas of the raceway with blinding dust.

During qualifying, driver after driver attempted to enter the turns low and broad slide under a hard throttle, but each experienced anxious moments when the surface would not permit power sliding.

A.J. Foyt, shooting for his own 26.24 second mark he set last September, expertly displayed the style that “on the Midwest” as he charged to the midpoint of the straightaway’s, cut his wheels sharply left and broad slid under power, aiming for the bottom edges of the shallow-banked turns. A.J.’s clocking was 26.87 seconds, well off his record mark, but quick enough to set fast time.

Foyt, however, would experience problems in the four-car fast dash. Attempting to pass McCluskey for the lead, Foyt would leave the packed low groove and try to pass Roger on the treacherous outside lane. A.J. immediately found himself shooting hood-first into the outer guardrail. Skillfully reducing he consequences to a few minor dents, Foyt went on to finish third behind McCluskey and Jack Bowsher. Foyt returned to the pits where it was discovered that he had differential problems. It was announced that A.J. would not make the 20-car field. The first alternate, Dick Trickle with his ’67 Fairlane, was added to the field.

Because of Foyt’s absence, the 1968 Rookie of the Year, Bill Jackson, inherited the pole position of the inverted start. Terry Nichels, campaigning a ’69 Charger, voluntarily moved to the rear of the field, suspecting from low oil pressure readings, engine failure was imminent. Moments before the start of the feature, Jack Bowsher’s crew completed work on Foyt’s car, and he returned to the line-up, displacing Trickle.

At the drop of the green Bob Wawak, driving a ’68 Charger, moved from the outside front row to assume the point as lead cars created a dust saturated cloud on the backstretch. Driving through the dust and into the sun, driver’s visibility was so reduced, several rear end collisions occurred as the field entered turns three and four.

Whitey Gerkin, piloting a ’69 Chevelle, passed into the lead coming down the frontstretch on the second lap with Dave Whitcomb following behind in his ’69 Charger. Confounded by visibility and traction problems, numerous drivers decided to pull in and pit in the early laps.

Whitcomb pulled in several laps later, rushed to the scoring tower, and advised USAC official Billy Taylor of the severity of the visibility situation on the track. The decision was made to red flag the event at the completion of 17 laps for a conference between drivers and officials.

After examining the condition of the surface, Foyt and McCluskey recommended that the event continue. Water trucks were again sent out and the 17 entrants still in contention lined up for a yellow flag restart with Roger Regeth, now leading in the Al Piette-owned Plymouth. J.J. Smith, in the Al Piette-owned ’67 Comet, was in second and Gerken dropped back to third.

The track again appeared as slippery as ice as Regeth paraded the field around before the competition resumed. While the packing corrected the dust problem, the daylight time was running out with sun already behind a cloud bank.

As the green waved, Regeth proceeded to stretch his lead on the field while Whitey Gerkin pulled to the infield with engine problems. Later, on lap 42, Foyt reached the rear bumper of Regeth’s car, but having experienced collisions with the rail on two other occasions when attempting to drive a higher pattern, Foyt was reluctant to pass. On the straights, Regeth was pulling away from everyone.

Foyt was eventually eliminated from contention on lap 48 with engine failure and his teammate, Jack Bowsher moved up to second to challenge Regeth. Jack succeeded where A.J. failed and managed to secure the lead from Regeth. However, on lap 59, Bowsher bobbled going into turn two, couldn’t keep his car under control down the backstretch and slammed into the turn three outer rail. The damage to the front end of his car necessitated a tow truck to clear away the damaged Torino. Between Foyt and Bowsher, the team retired for the evening with a combined $475 earned for their efforts.

With only seven cars remaining on the track when the green waved again on lap 70, Regeth again assumed command of the lead with McCluskey inheriting Bowsher’s spot, J.J. Smith in third and Paul Feldner running fourth. Smith and Feldner would battle back and forth for the remaining 30 circuits and the two Wisconsinites were as evenly matched as you could get, with both drivers never more than a car length apart.

On lap 83, Regeth’s luck, and his chance for his first USAC stock car victory, would fall short. Leading McCluskey by over half a lap, Roger’s engine would experience mechanical problems. He would slow, and then limp around for the remaining laps to secure fourth place.

McCluskey, driving now in semi-darkness, cruised on to victory, completing the 50-mile “mud-slinger” almost two laps ahead of runner-up J.J. Smith. Paul Feldner, Regeth, Joe Frasson and Ross Smith were the only cars that remained operational at the end of the contest.

Twilight quickly faded and total darkness then settled over the site of one of the most unusual experiences of the USAC stock car division.