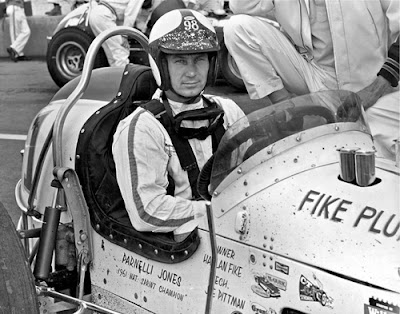 Jones collected $1,245 in prizes — $750 for winning the feature, $250 for his appearance as national defending sprint champion, $200 for the fastest qualifying speed and $45 for winning his heat.

A. J. Foyt, Houston, Tex., was running third in the feature when he blew a tire on the twenty-fifth lap. His auto skidded, spun halfway around and smashed into the outside wall. Foyt jumped from the racer and was not hurt.

Jones qualifying time was 24.93 seconds around the 5/8-mile track. He owns the Raceway Park record of 24.41 seconds.

There were no serious wrecks. Dave Norris of Columbus, Ind., however, spun in the first turn after his qualification attempt.