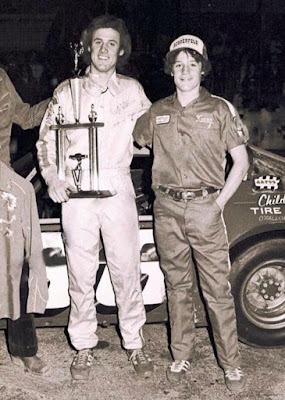 Rusty Wallace is joined in victory lane by his brother Kenny after winning ARTGO special at Capital Super Speedway.

Wallace was late in arriving at the track, after making a nine-hour drive from Springfield, Mo., where he had raced on Sunday.

However, the 21-year-old chauffer still managed to turn in the evening’s 11th fastest time in qualifications to earn the outside front row starting assignment.

Wallace then made good use of the starting berth, rocketing into the lead and going on to the checkered flag without having to face any serious challenge in the contest, which was slowed only one by a caution flag.

Dick Trickle of Wisconsin Rapids, Wis., the night’s fastest qualifier, moved into second place on lap 15 after a tough battle with Doug Strasburg of Johnson Creek, Wis., who would eventually retire after 31 laps when mechanical issues troubled his mount.

Larry Detjens of Wausau, Wis., passed Bob Senneker of Dorr, Mich., to claim third place on lap 47, but without the benefit of a caution period, Detjens was unable to close on the frontrunners.