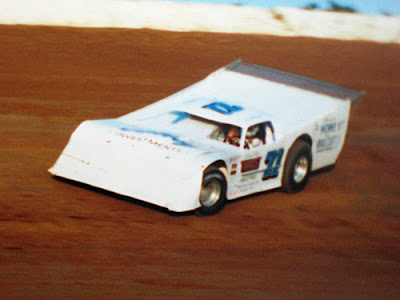 Helfrich took the lead on lap 76 from Rodney Combs of Lost Creek, W.Va., when Combs’ car developed trouble and was never headed the rest of the way. Helfrich, 32, dueled with Kevin Gundaker of Batesville, Ark., until lap 95 when Gundaker’s car slowed rapidly and held on to take the $20,000 first prize in the three-day event that paid out $100,000 in prize money.

Combs was forced to qualify for the 100-lap feature through the consolation race – the first time he’s ever run a consolation in NDRA history. Larry Phillips of Springfield, Mo., led at the start but was quickly overtaken by Freddie Smith of Kings Mountain, N.C. On lap 48, Larry Moore took over for three circuits until the 51st lap stop for fuel…and nearly all cars changed rear tires because of the track’s abrasiveness.

On the restart, Moore again led, but quickly faded, leaving Smith again out front. Smith then faded and Combs took over the lead, having come from the 12th row. Comb led until Helfrich took over on lap 76.

The final night of action on the high-banked, half-mile dirt oval drew a standing-room-only crowd of more than 8,000.

Kansas City’s “Super Joe” Wallace borrowed his son’s car to win the Lunati Cams’ sportsman world championship. The win was worth $3,000 to the 41-year-old veteran. Wallace spent much of the off-season building the car for his son Brian – spending $1,000 on the car – and he turned it into a winner in the 50-lap, $12,000 race.

Wallace started on the 12th row, but sped quickly to the front, taking the lead on lap 15. Wallace then beat Todd Stueber of Fairmont, Minn., by five seconds. Polesitter Mel Sorenson of Omaha, Neb., finished third followed by Greg Larson of Plattsmouth, Neb., and Ken Farrell of New Hampton, Iowa.