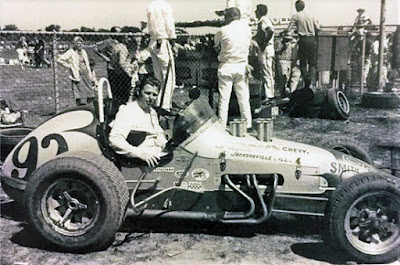 Weld, a 23-year-old driver who was a national modified champion in 1964, started the night on the right track by reeling off the fastest qualifying time during time trials then captured his heat race and the 30-lap feature to pocket $960 of the $5,000 purse.

Weld, starting in the fourth position, took the lead from Larry Dickson of Marietta, Ohio, on lap 13 and then proceeded to open a wide lead which proved too much for Bruce Walkup, of Downey, Calif., who finished second, to overcome.

Walkup had shortened the deficit of half-a-lap to about 100 yards during the last 10 laps.

It had been three-car race for the first 13 laps with Mike Mosley of La Puente, Calif., battling Dickson and Weld before Dickson secured the lead on lap 8. Then it was Weld’s turn.

The victory was Weld’s sixth triumph of the season the USAC circuit as he opened a wide margin over Rollie Beale of Toledo, Ohio, in the season’s point standings.

Weld’s time of 23.39 seconds in time trials set a track standard for sprint cars at the fairgrounds. He was the very first to run, and then set back and watched as time stood up.

Only 20 cars recorded qualifying times from an expected total of over 30 entries.

Such well-known names as Bobby Unser, Johnny Rutherford and Aldo Andretti failed to either run or qualify.

Unser drove Rutherford’s car but spun out on two different curves on the slick track to wipe out both lap times, and Andretti, the famed Mario Andretti’s brother, crashed into Dickson on the south curve during warmups.

The collision brought the 3,015 spectators to their feet. Dickson was stepping out of his car, which had hit the wall, and was knocked to the ground as Andretti crashed into the back of his car. Dickson was uninjured and proceeded to finish third in his heat before running into trouble in the feature where he finished 14th.

Mosley, Weld, and Sam Sessions of Nashville, Mich., were heat winners while Walkup won the semi-feature.