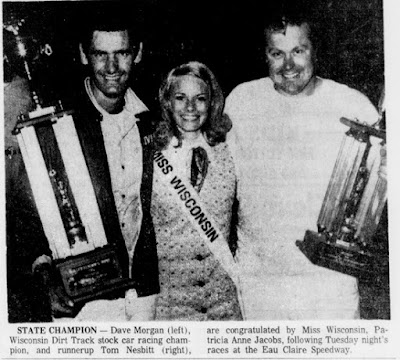 The popular driver did it Tuesday night at Eau Claire Speedway with Miss Wisconsin one of the estimated 3,000 witnesses.

Morgan won out in a 40-lap duel with Tom Nesbitt, driver from Thunder Bay, Ontario, Canada as Harold Mueller, the local favorite, experienced car problems and finished far back in the pack.

Steuding’s finish was amazing in that he negotiated the last 20 circuits with the hood of his car up and blinding his view. Steffen also experienced hood issues in the final laps.

Morgan started on the pole, saw Nesbitt starting behind him, lead briefly during the first lap, and then shot ahead and held the top spot the rest of the way.

Morgan, however, driving a 1957 Chevrolet Corvette, couldn't open any kind of comfortable lead in his bitter struggle with Nesbitt, who was right on his tail right to the finish.

Steuding, the track’s season point leader, was running a close third when his hood popped up. Fitzpatrick and Steffen took advantage of the opportunity to move ahead but Steuding hung tough with some courageous driving to take fifth.

Twenty-one cars lined up in the feature according to their finish in heats and consolation.

One of the early dropouts was Phil Prusak, Eau Claire, who was running third when his engine failed on lap 6.

Mueller, one of the state’s big winners this year, started the main event in the seventh row but it was apparent from the start that engine problems would prevent him from making a challenge.

Mueller was lapped by the leader on the 25th lap and wound up just out of the money in 11th place.

In winning the feature, Morgan captured the Russ Laursen Memorial trophy, presented in memory of the Cumberland driver who lost his life in a racing mishap last year.

Tuesday’s crowd of 3,000 plus watched the action in beautiful weather.