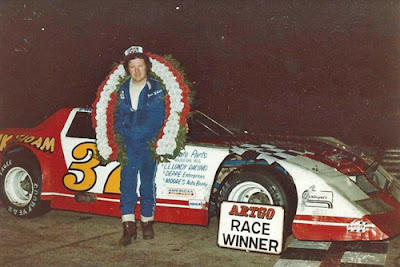 Dave Watson in victory lane after winning the ARTGO All-Star 100.

A former Rockford champion and winner of the speedway’s National Short Track Championship, Watson wheeled his 1982 Firebird to the win, which was Watson’s first in ARTGO competition since 1976, when he won the ARTGO championship. With his victory, Watson became the ninth different winner in 15 events to score a feature win in ARTGO action this season.

Watson was chased across the finish line by Joe Shear of Beloit, Wis., who pressured during the last half of the race and finished only a couple of car length behind the winner at the checkered flag.

The leading duo ran off and hid from the rest of the field during the last 50 circuits and finished better than half a lap ahead of third-place finisher Dick Trickle of Wisconsin Rapids, Wis.

A field of 20 started the 100-lapper on the quarter-mile, high-banked paved oval with Rich Bickle of Edgerton, Wis., and his 1982 Firebird charging into first-place at the drop the green. Bickle, who started on the outside of the front row, began to build a strong margin as the rest of the field sorted itself out.

Lap 12 saw Bickle’s commanding lead disappear with the event’s first caution involving a wreck between Mark Martin of Batesville, Ark., and Jim Sauter of Necedah, Wis. Bickle would continue to lead when green flag racing resumed with Watson, Trickle and Shear breathing down his neck.

Watson, looking for one little mistake, found it on lap 41, slipping into the lead as the pair raced through turns one and two. A total of 42 lap were in the books when the yellow light flashed again for debris on the track.

When the green light returned, Watson continued to pace the event with a now second-place running Joe Shear right behind.

A master of the Rockford oval with six titles under his belt, Shear tried to slip underneath Watson as the pair exited the corners with Watson holding off stiff challenges. Watson’s ride to victory almost collapsed on lap 57 as he got crossed up with a slower car coming off of turn four.

Coming back from his early race accident, Mark Martin battled back up through the pack. Restarting at the tail end of the field, Martin tried hard to move towards the front with his now not so perfect handling ride. Cutting quick times lap after lap, Watson and Shear would eventually put Martin a lap down on the 78th circuit. He would finish seventh, one lap down.