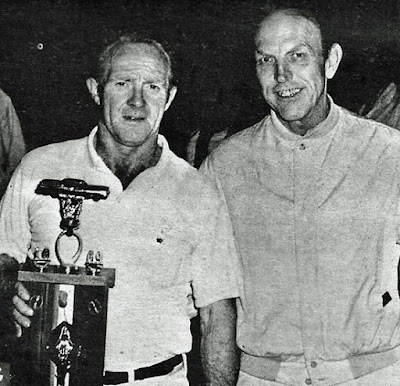 The triumph was the fourth of the season for Droste and his 1968 Chevrolet and it was good for $450. It also gave him a commanding lead in the point’s race over second-place Ed Sanger, also of Waterloo.

Sanger, driving a ’69 Chevelle, finished second, after staring at the redhead’s bumper for the full distance on the quarter-mile.

Both of the top finishers started on the front row and Droste maintained a five-car-length advantage for the first 40 laps. When the only yellow flag came out on lap 41, Sanger was able to close tight on Droste, but he wasn’t able to get the job done in the last 10 circuits.

Thus, Sanger failed in his first opportunity to “get” Droste, as he had vowed two weeks ago. Droste, on the other hand, appeared more than pleased over the outcome.

“Yes, tonight’s win gave me a particular satisfaction,” he said. “Especially after what I read in the Gazette a week ago.”

Red was referring to Sanger’s statement that he would recapture the point lead before the season was over.

Roger Dolan of Lisbon, driving a ’69 Roadrunner, finished on the same laps as Droste and Sanger, taking third. John Connolly of Delhi and Glen Martin of Independence rounded out the top-five.

Becker enjoyed another double night of fun, racing his ’57 Chevy to the win in the 25-lap novice mid-season title race. He also won the first heat with Perry Beckler of Tiffin winning the second heat.