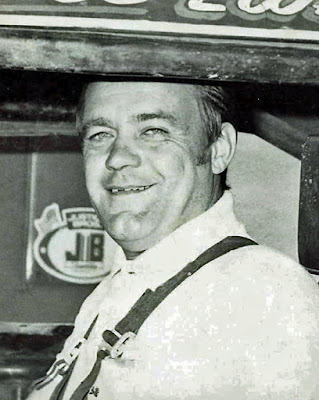 Cedar Rapids, Iowa (July 18, 1972) – Hard charging Bill Zwanziger of Waterloo, Iowa withstood transmission problems and a pair of late restarts in the final 17 laps to capture the ADS Midwest Open late model stock car championship at Hawkeye Downs on Tuesday night.
It’s doubtful that any of the 4,500 on hand were aware that the veteran Waterloo pilot was having any difficulty with his 1971 Chevy, judging by the comfy quarter lap margin he had over second place Ed Sanger at the finish line.

Zwanziger, the mid-season champion at the Downs, flew around the half-mile dirt on his way to victory lane. When it was over, tough, the winner breathed a sigh of relief.

“I had a little problem with the transmission. It kept jumping out of gear,” he disclosed. “It happened about six or seven times. The linkage must be off.”

The problem, according to Bill, made him run all that harder. Mainly out f fear of being caught. The restarts, the last one with 13 laps left, increased that fear because the rest of the pack was allowed to sneak up on his bumper.

“I was afraid I'd really be in trouble if I lost the gear with someone right on me. So, when we did restart, I tried to get as far out in front as fast as I could.”

Zwanziger, who started inside in the second row in the 22-car finale, was the race's third and final leader. He grabbed the front spot on the 23rd tour when Verlin Eaker of Cedar Rapids bowed out with a broken A-frame on his 1972 Chevy. Eaker, a USAC veteran, had led from the second lap after Mike Niffenegger of Kalona had set the pace.

Ed Sanger and John Moss of Iowa City were practically inseparable for the final 13 laps Moss several times pulled wheel to wheel with Sanger on the straight away but Sanger had the groove and pulled him out of the corners.

Then, on the final lap coming out of turn four, they came upon lapped cars. Sanger ran into one, veered to the right in his 1979 Chevy and knocked Moss's 1970 Plymouth into the wall, only 150 yards from the finish line. Sanger was home free and pocketed $525. Moss was relegated to ninth and $125, while Fred Horn of Marion moved into third and claimed $350.

Moss, whose sponsor, Advanced Drainage Systems, co-sponsored the Midwest Open with Super Stocks, Inc. was fuming long after the race.

"I saw the traffic and figured I would have to settle for third place," he said. "What I can't figure out is why Sanger hit the lapped car."

Sanger explained, “I was set up to go by the lapped car (Bob Bonser) on the outside. But he pulled out to go around another lapped car and I hit him. That pushed my car outside and I hit Moss."