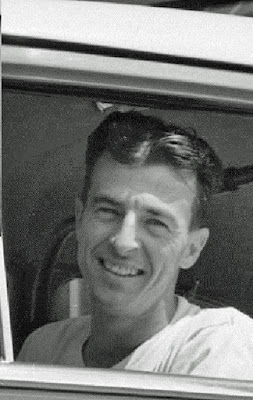 The young Keokuk, Iowa pilot, who wheels a 1954 Oldsmobile, took the lead on the first lap of the feature event and led the entire 75 miles before a packed grandstand of race fans watching the first auto races on the “new” Sioux Empire racetrack.

White was never pushed hard throughout, and the race was comparatively uneventful although the field of 20 cars was probably as good a field of stock cars as ever been run there.

Despite the intense heat, White and second-place finisher Ernie Derr both toured the distance without making a single pit stop. Derr, a Fort Madison, Iowa, chauffeur, who is White’s brother-in-law, made it a clean sweep for the Oldsmobile’s as he finished second in his ’54 Olds, a half a lap behind.

Herschel Buchanan, the drawling, laid back 48-year-old veteran who practically homesteaded the “old” Sioux Empire track and had won five of seven stock car grind here until this afternoon, failed to stake a claim on the “new” oval and finished third.

Buchanan, a Shreveport, La., driver, made his first appearance in 1954 Hudson Hornet after being a devotee of Nash for many seasons. Tire trouble plagued the two-time former IMCA national champion. He blew a right rear tire on the 117th lap while riding in third and temporarily lost his position to Tubby Harrison of Topeka, Kan., who drove a 1954 Dodge.

But Buchanan was back in after a brief pit stop and regained third. Harrison finished fourth and Bob Potter of Duluth, Minn., driving a spanking new ’54 Olds in it’s first race, finished fifth.

“Wild” Bill Harrison of Topeka, Kan., winner of the 90-minute marathon here last year, was forced out of the race on the 33rd lap with an overheated engine.

White, the diminutive driver, set a blistering pace, and with his windshield wipers going full blast, sailed through the dust to an unusually fast time of 1 hour, 23 minutes and 23.75 seconds. The time was announced as a new IMCA record.

Derr had the fastest time in qualifying, turning the half-mile in oval in 31.97 seconds although several cars were turning laps much faster than that in the feature.