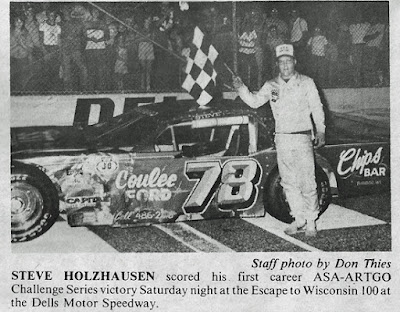 A 10-year veteran of racing, Holzhausen, the 1980 Dells champion, moved into the lead on the 25th lap after starting seventh in the 24-car field.

Having a half-lap margin at the checkered flag, Holzhausen finished ahead of Tom Reffner, Jim Sauter, series leader Dick Trickle, and Steve Burgess.

Joe Shear moved his Firebird into the lead at the start of the 100-lapper. Shear, who started on the outside of the front row, paced the opening round with Jim Weber and Mel Whalen giving chase.

Moving quickly to the front, Holzhausen moved into third on lap 13 and second by lap 19. Using the outside groove Holzhausen set his sights on Shear. Taking the high side, Holzhausen moved past Shear as the pair raced into turns one and two on lap 25.

With Holzhausen in command, Reffner moved in to challenge only to see the new leader pull away to his first ARTGO Flag. Holzhausen began a comfortable margin, holding a quarter-lap lead at the halfway mark.

With no yellow flags to slow his progress, Holzhausen stretched his lead using the outside groove to build the margin to a half-lap at the finish.