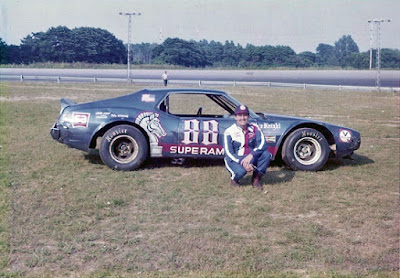 Plover, Wis. (July 4, 1976) - While people all over the nation were celebrating our country's 200th Birthday. Tom Reffner was celebrating his first feature victory of the season at Paul's Golden Sands Speedway on Sunday afternoon.

Reffner of Rudolph picked a good time to win his first main event here, in the special Spirit of 76 holiday races, which featured many of the top drivers from throughout the Midwest.

Reffner had a relatively easy time in the 76-lap race taking the lead from Bill Oas of Bloomington, Minn., on the 29th lap.

Oas was one of only two leaders in the race. Mike Miller of Wisconsin Rapids moved into second on the 30th lap and remained there until the 72nd lap when short track ace Randy Sweet of Portage. Mich. passed him. By then Reffner was long gone, and Sweet had to settle for second. Miller hung on and placed third. Joe Shear of South Beloit, Ill., was fourth and Jim Back of Vesper finished fifth.

Stevens Point's Rich Somers blew an engine while hot lapping. He went home and put a new one in and came back just in time for the feature. He finished sixth

Miller won the dash for the day’s top chauffeurs and Dave Watson of Milton had the fastest time in 13.084 seconds.

Bob Mackesy of Wausau passed New Lisbon's Tom Jenson with 10-laps to go to win the 25-lap semi-feature. Jenson finished second and Wausau's AI Schulz after working his wav up from the back of the pack finished third

Lavern Grandal from Portland, Mich., in his first appearance at the speedway this year drove off with top honors in the 10-lap consolation, and he also captured the first heat.

Other heat winners were John Brevik of Fairchild, Oas and Shear.

Jerry Bohm of Amherst Junction once again scored a clean sweep in the hobby stock division, setting fast time, winning the dash and placing first in the feature.
Results –