1976 - Anderson Lays Back, Then Wins Winchester 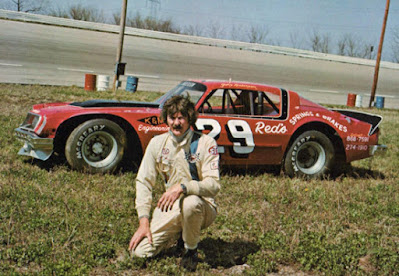 Winchester, Ind. (July 5, 1976) – The American Speed Association outlasted nature’s elements on Monday at Winchester Speedway while awaiting a transformation from the “Raindrop 200” to the originally scheduled “Birthday 200.”

John Anderson, Warren, Mich., found himself in the right place at the right time to overcome the mysteries of the high-banked half-mile asphalt oval. Anderson is a hard charger but found the best strategy was to lay back and let the “hot dogs” fall by the wayside.

The afternoon started off with a bang when “The Bluebird” Bob Senneker, Dorr, Mich., set a new world record with a time of 16.954 seconds (106 mph). Right behind him were Larry Moore, Fairborn, Ohio, Rodney Combs, Mason, Ohio and Mike Eddy, Kawkawlin, Mich.

Neal Sceva opened on the outside of the pole position due to an inverted start of the eight fastest qualifiers, only to hold the lead for seven laps when the fearsome foursome of Eddy, Moore, Combs and Senneker began the duel of door-to-door action.

Senneker sidelined himself while leading the pack when he misjudged some space between two slower cars and sandwiched himself in the middle, an error you rarely see from a superb driver. Moore, then running in front, struck the outside retaining wall on the first turn and he was pit bound.

This put Eddy in the lead, only he would lose a water hose, which sent Combs, running in the second spot, spinning into the inside main stretch guard rail. He hit a water barrel and Don Higgins, New Castle, Ind., went sliding out of control after him. Thee race was stopped for officials to mop up the water.