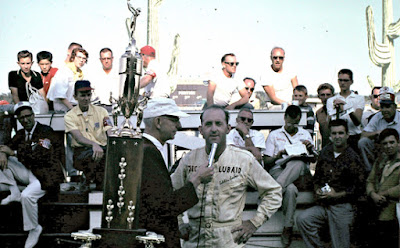 Rodger Ward of Indianapolis, winner of the 1959 Indianapolis 500, narrowly escaped serious injury on the 55th lap of the race when the drive shaft of another car dropped to the pavement and bounced through the windshield of Ward's car. It landed just a foot away from the driver. Ward left the race five laps later after going into a spin.

Minor accidents and rain cut down the winners’ time with 35 of the 200 laps run at reduced speeds under the caution flag.