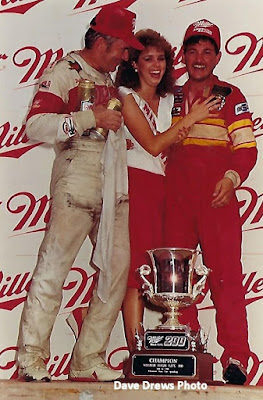 West Allis, Wis. (July 6, 1986) - Butch Miller has taken the lead in the American Speed Association series standings by winning what he calls one of the two most important stock-car races on the ASA circuit.

The lead changed 12 times among seven drivers. Harold Fair, who started in the pole position, fell behind because of several problems, including a flat tire.

As for Shear, it was his first ASA competition of the summer and he was happy with the results.

“I wasn’t that fast, but I ran consistently all day,” Shear said “I would have liked to have run with the leaders, but the car wasn’t handling that well. I just watched the drivers in front of me drop out and pretty soon I was in third place.”

On the other hand, Alan Kulwicki of Greenfield, Wis., started 10th and got as far as sixth before he was eliminated on the 91st lap by a collision with Bob Senneker of Dorr, Mich.

Miller lost his third gear. He battled Allison, nevertheless, taking the lead for good on the 175th lap.

His victory by 1.5 seconds ahead of Allison was his first on the mile track at State Fair Park. He averaged 84.260 miles an hour.

“I thought I had a good shot at winning it. I really did,” said Allison, the winner here in 1978. “I saw that he (Miller) was running awfully good, but I was hoping that he’d make that one mistake in his 10 years.”

However, Miller made it a mistake-free day in earning his $8,990 check. Still, he was concerned - especially when a caution flag was dropped on lap 179, which was four laps after he had taken the lead.

“I expected (Allison) to blow by at the restart,” Miller said, “but he didn’t. After that, I was worried about getting as much distance between myself and him, just in case something would happen.”

After it was over, Miller ranked the race in equal importance to the event at Michigan International Speedway in Brooklyn, Mich.

“I would have traded a lot of ARTGO and other wins to win this one,” Miller said. “I guess what I ’m saying is that, if you’re looking for position on ASA, it ranks right with Michigan.”