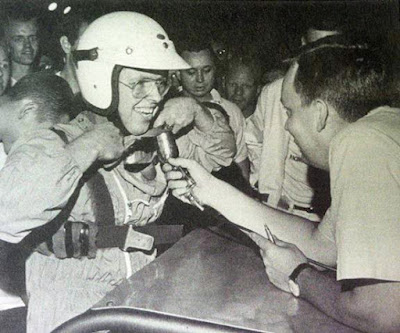 Weld, the second fastest qualifier on Friday night, took the lead on the opening lap and kept a few hundred yards ahead of his closest pursuers before an estimated 9,000 race fans at the Marion County Fairgrounds.

The feature was delayed several minutes just as it was about to start when a spectator was seriously injured as the cars sped towards the start/finish line.

It was halted twice more by spinouts on lap 4 and 6and then interrupted again on lap 14 when a track official thought he had detected a car blocking a turn. That was a false alarm.

The injured spectator was identified as 20-year-old Danny Adams of Topeka, Kan. He was reported to have suffered a compound fracture of the right leg and facial burns caused when a live wire struck him.

Adams was standing beside a light pole near the fourth turn when a car driven by Shorty Burkholder of Goff, Kan., glanced off another vehicle and veered to the left, striking the youngster and pinning him against the pole. The accident also put Burkholder out of the race.

Jud Larson of Kansas City spun out on lap 4 and two other drivers hit the fence on lap 6.

Jerry Blundy of Galesburg, Ill., who qualified two cars for the main event, didn’t get to drive any.

He chose his Blue #33 for a heat race and when the engine blew up, he was out of action. Racing director Marion Robinson ruled that he could not race his Red #33 in the main event.