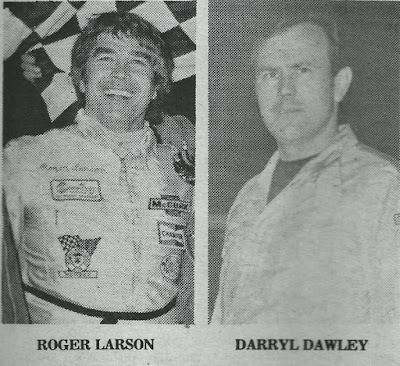 Darryl Dawley of Sioux Falls, S.D., and Roger Larson of Madison, S.D., were killed in a front straightaway crash at the start of the feature event. Larson appeared to get sideways on the front straightaway and as he began to flip, he was hit hard by Dawley, who in turn was hit by Eddie Leavitt of Kearney, Mo. Leavitt was also hospitalized along with Chris Maurer of Colfax, Iowa, who hit an infield fence avoiding the crash.

When the race restarted, Stevenson jumped out to the lead only to see the caution flag wave for Johnny Anderson who brushed the third turn wall.

When the green came back out, Stevenson again bolted into the lead with Ralph Blackett running second. Mackie Heimbaugh moved past Blackett on lap 6 but one lap later the yellow came out again, this time for Heimbaugh, as he came to a stop on the front straightaway with mechanical issues.

With 14 laps left, Stevenson set sail when the green flag waved and led the rest of the way over Mike Brooks, who was closing at the finish but did not have enough time to make a serious challenge. Blackett wound up third with Doug Wolfgang in fourth.

Wolfgang had taken over for an injured Steve Hainline and started from the rear of the field. Randy Smith took fifth.

The feature win was the second of the season for Stevenson.

The race track was in excellent condition as 16 drivers timed in the 20-second bracket, headed by Eddie Leavitt’ lap of 20.432 seconds. The track also led to two record setting wins for Randy Smith.

Smith won the 5-lap trophy dash in 1 minute and 42 seconds, breaking the old record held by Bill Robison. Then, in his heat race, Smith nearly shaved a second off his month-old record, winning in 2 minute and 48 seconds.

Larson and Dawley were both regular racers at Knoxville. Larson had not missed a show this season, posting second and third-place finishes in feature events and was third in the current point standings. Dawley, just last week, won the feature, his first at the track since 1974. The deaths were at Knoxville since Burt Sonner was killed on opening night in 1974.