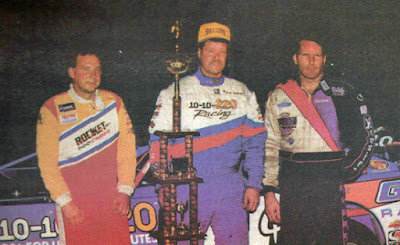 Davenport, Iowa (June 22, 1999) – Rick Aukland of Fargo, N.D., led only one lap during the 50-lap United Dirt Track Racing Association (UDTRA) Hav-A-Tampa Dirt Racing Series event at the Mississippi Valley Fairgrounds, but it was the last one, and it was worth $10,000.

Aukland made a last lap pass for the lead over Scott Bloomquist of Mooresburg, Tenn., for the win. Bloomquist had led the first 49 circuits, but the three-time and defending Hav-A-Tampa champion had to settle for second.

With five laps to go in the race, Aukland was running third behind Bloomquist and Steve Francis of Ashland, Ky. Aukland passed Francis for second on lap 46 and then began his charge to the front, bringing the standing-room-only crowd to its feet for the last lap shootout.

When the white flag fell, Aukland looked to Bloomquist’s inside, but the leader took his car to the bottom groove for the first time in the race. Aukland was able to get another run on Bloomquist on the inside running down the backstretch, and this time got to the third turn first, moving under Bloomquist for the lead to the checkered flag.

Francis hung on for third with fourth going to Dan Schlieper of Pewaukee, Wis. And fifth going to Wendell Wallace of Batesville, Ark.