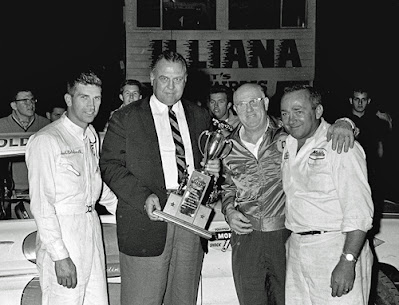 The St. Clair Shores, Mich., pilot drove a 1961 Pontiac owned by Ray Nichels Engineering of Highland, Ind., and beat second place finisher Don White of Keokuk, Iowa, to the checkered flag by a quarter of a mile.

Owner Harry Molenaar’s half-mile dirt strip was rated extremely fast and as one USAC official put it, “If you don’t like the kind of show the boys put on tonight, you just don’t like racing.”

The track was so fast that Illiana’s previous record for qualifying, 27.32 seconds, was topped by seven drivers with Goldsmith holding the new record of 26.32 seconds.

The Goldsmith crew had its problems early on in the evening. A tank proved to be filled with water and the car’s gas tank had to be drained and the carburetor had to be torn down and cleaned. Later, a jack slipped while changing a tire, but no one was underneath the car at the time.