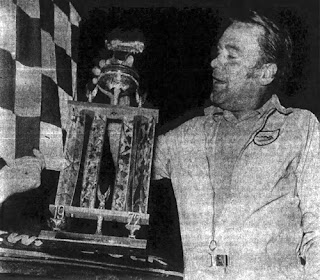 Bill Zwanziger admires his trophy after winning the mid-season title at Cedar Rapids.

Zwanziger and Ed Sanger had different opinions on how it all came about, in one of the most closely contested duels on the half-mile dirt oval this season.

The season’s biggest crowd of 4,173 watched Sanger, the polesitter on the basis of being the point leader – lead for 26 laps before spinning out on the fourth turn of lap 27.

What took place created the controversy between the two pilots from Waterloo.

“Zwanziger spun me,” claimed Sanger. “There was no excuse for it. I had the high groove, and he knew there was nowhere to go down low because of the mud there.”

No, I didn’t get crossways – not until Bill hit me! And he hit me hard enough there was no saving it.”

Zwanziger didn’t see it that way.

“Ed hit a hole and came crossways,” he explained. “I put on the brakes – hard – and tried to miss him, but I tapped his rear end. I couldn’t help it.”

Whatever, the spin cost Sanger four places and Zwanziger sailed home scot-free in his 1970 Chevy. His triumph, Bill’s first feature of the campaign at the Downs, was worth $500.

Zwanziger made it evident that he was to be reckoned with from the sixth lap on. He, Keokuk’s Ramo Stott, and Iowa City’s John Moss were all in hot pursuit of Sanger and not much more than a quarter car length separated the quartet.

That trio fought for second place until the 23rd lap when Zwanziger took over for good.

“I could get under them (Stott, Moss), but the groove was up high, and they yanked me coming out of the turns. There were some holes in both corners, but my car works better in that situation.”

“I think it’s to my advantage because I can run through them.”

Three 1970 Plymouths trailed Zwanziger across the finish line. Moss was second, followed by Marion’s Fred Horn, who made a move on Stott with two laps left to claim third while Stott settled for fourth.