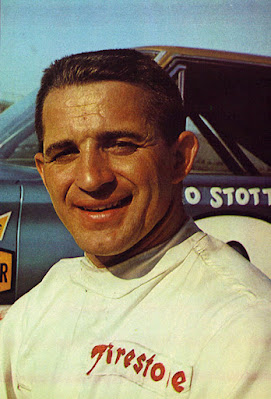 Minneapolis, Minn. (June 13, 1965) – Like thousands of others, Ramo Stott took advantage of a warm, sunshine-filled day and went for a pleasant Sunday afternoon drive.

Unlike other motorists who toured the state, Stott ended his junket by picking up a check for $1,900 as he won the 300-lap feature stock car event in the inaugural Paul Bunyan “400” that attracted 17,723 cash paying customers to the Minnesota State Fair Speedway.

The 30-year-old veteran from Keokuk, Iowa, piloted his 1965 Plymouth around the half-mile course with the skill of an astronaut, ending the affair almost as soon as it started. Holding the pole position, he tromped on the accelerator and led all the way, passing the entire field three times en route to the finish line.

He made only two pit stops but held such a wide margin over runner-up Lenny Funk of Otis, Kan., that he could have made more, or stopped off at Howard Johnson’s.

He completed 25 laps in 9 minutes and 49.07 seconds to better the mark of 10 minutes and 0.89 seconds set at last year’s State Fair by Dick Hutcherson.

“I felt I could win, if my car held up,” Stott said. Sure, it was a big race, but I’m shooting for something bigger this year.”

“For the past five years, I’ve finished second in the national stock car point standings, and I want to win it. I’m second now, but I’ve won three of the last seven races and I think I can win more.”

Funk collected $1,400 for his second-place finish while Ole Brua of Albert Lea, Minn., picked up $1,100 for third place.
Harold Smith
Harold Smith of Dayton, Ohio, captured the first half of the twin-bill, by winning the 100-lap sprint car feature, which like the stock car feature, was caution free. He took home $1,800 for his efforts.

Smith let others set the pace while he won the race. He, too, held the pole position and led the first three turns before being passed by Oscar Fay of Mishawaka, Ind. Fay held the top spot until lap 24 when Dean Mast of Toledo, Ohio, passed him.

Mast, the only driver to compete in both affairs, set “world records” for 25 and 50 laps with clocking’s of 9 minutes and 6.46 seconds and 18 minutes and 15.12 seconds. But on the 87th lap, he was trapped by two slower cars, giving Smith a chance to catch up.

Smith powered past Mast on lap 90 and won in 36 minutes and 40.82 seconds, averaging 81 miles per hour. He did not make a pit stop in his Buick-powered sprinter.

Mast, who dropped out of the stock race with engine woes, settled for second and collected $1,250 while Fay made a pit stop to change a tire and finished 13th.

“I didn’t think I had a chance to catch Mast until he got bogged down in traffic,” Smith admitted. “It was sure nice to win my first race of the year.”