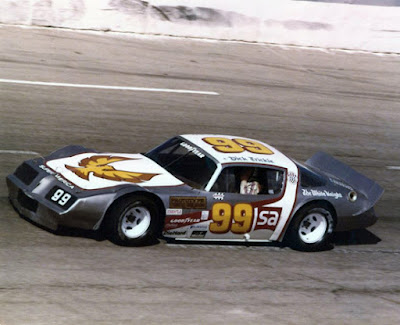 With a Father’s Day crowd of 4,278 fans in the stands, Trickle took the lead on the 43rd lap after a race-long battle with Miller, Tom Reffner and Dave Watson.

“The second groove wasn’t being used much by the other drivers,” remarked Trickle. Trickle, who has won series point championships previously in 1972, 1977 and 1978, added that the win didn’t come easy.

“I wasn’t out there playing. They sure didn’t give me that race. I worked for it,” he indicated after climbing out of his 1977 Superamerica Firebird.

Jerry Eckhardt came off his front row starting berth to lead the opening lap before being overtaken by Steve Burgess. Burgess opened up a seven-second lead over the rest of the pack by lap 8.

Meanwhile, Miller, Trickle and Reffner were working their way through the field. Miller took over the fourth spot on lap 10 and grabbed third away from Tom Musgrave on the 12th round.

On lap 15 Miller slipped to the inside of Jim Sauter to move into second place. Trickle and Reffner flowed Miller past Sauter on the inside.

By this time, Burgess had pulled to a quarter-lap lead, but the yellow flag waved on lap 17, slicing Burgess’s lead to just one-car-length on the restart.

Miller was able to slip his 1978 Olds Cutlass to the inside coming down the front stretch of the half-mile paved oval on lap 20. Trickle and Reffner also ducked under Burgess a lap later.

Watson tried a similar maneuver, but his car broke loose going into the first turn of the 23rd lap as he and Burgess tangled into a wild spin un the second turn.

Burgess was dropped to the rear of the pack on the restart and eventually finished eighth.

Reffner held down the second spot behind Miller until lap 41 when Trickle made a successful outside pass to claim the number two spot. Trickle remained in the high groove and passed Miller two laps later.

Miller kept glued to Trickle’s rear bumper right down to the finish but could not overhaul him. Reffner placed third with Watson in fourth. The top four drivers all crossed the finish line within two second of each other.