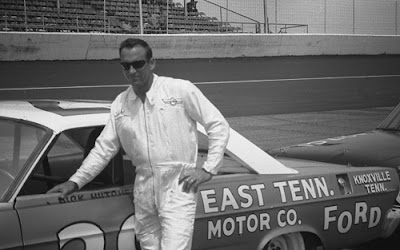 Dick Hutcherson poses next to his Holman-Moody Ford prior to the start of the Nashville 100-miler.

Hutcherson, NASCAR’s top driver in his first year on the circuit, easily drove away with the $1,000 first-place money.

Ned Jarrett of Camden, S.C., driving a 1965 Ford, was in second place for most of the race and finished there despite a slight collision with the wall on lap 195.

The finishers were not announced for at least an hour following the race when J.C. Putney claimed he lapped Jarrett when the veteran driver brushed the wall.

However, track officials said the yellow caution flag was out at the time. Jarrett was credited with second place, and Putney remained third.
Results –