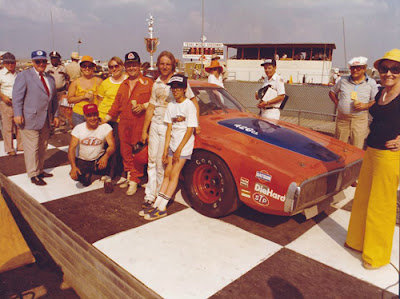 College Station, Tex. (June 5, 1977) — Bay Darnell sat in the checkerboard winner’s circle Sunday and pulled on a cold can of beer. For the taste of victory, it could have been a fine champagne.

After 15 years on the stock car circuit, the master car builder had won his first major track race and defeated the legendary A.J. Foyt in the same afternoon.

“I was crying on the last lap,” the portly Chicago trucking firm owner said after winning the Texas 500. “I just had a feeling I might win this race. I don’t know why.”

Five minutes before the race he did not know if he would be on the speedway because of a last-minute change in cars due to a mechanical problem. He borrowed a bell housing from a spare engine and installed literally at the last minute.

“I wanted something to finish,” he said. “As long as I could run steady all day, I knew I could be in the top five.”

Only 11 of the 33 qualifiers finished. The undisputed first half leader, Foyt, suffered a broken rear stabilizer and was forced off the high-banked oval and out of the race.

That left Darnell locked in a back-and-forth battle with Chicago’s Sal Tovella and finally with Paul Feldner of Richfield, Wis., and Gordon Blankenship of Keokuk, Iowa., who finished second and third respectively in their big Dodges at the fourth running of the classic.

Foyt, defending champion of the 250-lap contest, gave an estimated 35,000 spectators a brilliant driving performance before his mishap.

Darnell took a first-place purse with Feldner and Blankenship pulling in $7,500 and $5,500, respectively.

Darnell builds and maintains his own equipment, which is considered among the best on the circuit.

“I just race for the fun of it,” he said. “I work for a living. I go back Monday to my trucking business and tend to that so I can keep racing.”

Darnell, like most other stock car drivers, was impressed with Foyt’s stylish and speedy driving.

“The wily guy I couldn’t outrun was A.J. and maybe Sal,” he said. “I was passing Foyt in the comers. I passed him about four times in the comers. He’d give me a dirty look and step on the gas and go off and leave me.”

But in the searing heat — with track temperatures reaching a reported 140 degrees — it was mechanics, not style, that kept Darnell contending.

"It (the engine) just purred. Never missed a beat all day.” He said of his Dodge 426 engine. "Except I ran out of gas once on my second pit stop and I can’t figure out why.”