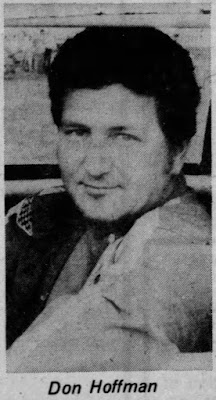 Mason City, Iowa (June 4, 1981) – There was a surprise at the Mason City Speedway on Thursday night.

Kevin Gundaker of St. Louis, the hottest commodity in Midwestern late model stock car racing right now, was in competition for the fourth annual Blue Ribbon- Coors Challenge Cup and he didn’t win. In an early restart of the 40-lap feature, Gundaker suffered a broken belt on his oil pump and retired for the evening.

Don Hoffman of Des Moines, a frequent campaigner at the track, would win the main event and collect the $700 first prize money that went with it.

Dave Bjorge of Sargent, Minn., the one-time wizard at winning on the big half-mile track, led early on but lost the lead to Hoffman on the second restart.

Denny Hovinga, another veteran driver from Pocahontas, ran a tight second to Hoffman but began to show smoke after 25 circuits. When the race had another restart on lap 27, Hovinga pulled his car to the infield for the night.

Gundaker’s losing was a surprise (he won two big events at the track last summer) but the program timing was not. The racing was scheduled at 8 p.m. but a grader and various trucks chugged around the track for nearly an hour, and it was well after 9 p.m. before the drivers started hot laps.

Translation: The feature race was finished just a little before midnight.

Hoffman drove a steady race, with his lap times averaging around 23 seconds and that figured out to be 78 miles per hour.

Gundaker won the first heat while Bjorge slipped past Sanger on the last lap to win the second heat. Hoffman won the third heat and Gundaker won the King of the Hill. Dick Schiltz won the consolation race.

The event drew 24 entries and the crowd numbered at 1,350, which pleased promoter Vern Mondry for a mid-week turnout.