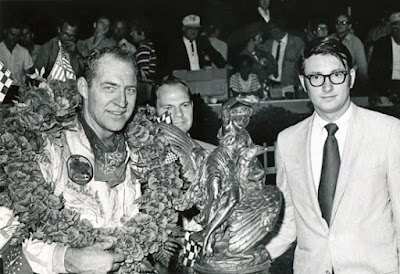 Nelson, the all-time stock car division point leader, posted a nine-second win over A.J. Foyt in winning his 31st career stock car event in what had to be one of the wildest races ever staged on the one-mile dirt oval.

Jack Bowsher, Springfield, Ohio, escaped injury in a spectacular flip on the backstretch on the 70th lap. Bowsher, owner of the cars driven by Foyt and himself, slid sideways onto the guardrail at the top of the backstretch and rolled along the rail in a shower of sparks.

After flipping at least three times, the car landed upright. Bowsher was removed from the car and placed in an ambulance but got no farther than the pit area where he was pronounced okay.

Prior to his accident, Bowsher was running fourth behind Butch Hartman, Nelson, and Foyt. At almost the same time as the accident, the engine in Hartman’s Dodge Charger let go, dropping him from the competition.

Nelson inherited the lead at that point, and when the green flag came out again on lap 80, he pulled steadily away from Foyt to win by almost a full straightaway. Nelson averaged only 69.627 miles per hour for the 100-mile contest.

Hartman, Foyt, and Nelson were the only three drivers to lead the race. Hartman, the fastest qualifier of the day, got the jump in the first turn when the race started and led the first three laps before Whitey Gerkin, Villa Park, Ill., spun his Chevelle into the turn three guard-rail, ripping out a 60-foot section.

The race was halted for 40 minutes while repairs were made. When the green flag returned on the 15th lap, Foyt moved around Hartman going into the third turn and led until the 35th circuit when he pitted under yellow for his mandatory pit stop.

White, driving a Dodge Charger, was a solid contender until he began losing ground at the halfway point. Finally, on the 64th lap, his engine came apart on the backstretch. The underside of the car caught fire and White’s car resembled a fireball as it moved down the backstretch. The fire blew itself out and White limped the car to the pits unhurt.