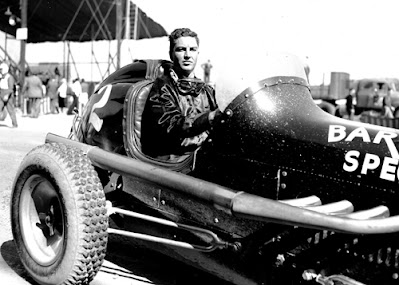 Grim pushed his big car through the .25-mile feature race in 23 minutes, 5.53 seconds to take his first victory in the Iowa racing classic.

The race was sponsored by the International Motor Contest Association. Grim was ranked as the IMCA champion.

The Futurity race was delayed or nearly two hours while track officials worked to get the muddy dirt oval in shape for the high-powered cars.

Despite the muddy condition of the track, only one accident occurred during the afternoon. During the time trials, John Parker, Shakopee, Minn., flipped his car on a turn but was not hurt in the mishap.

The best time trial of the afternoon was turned in by Don Carr, Detroit, who turned in a lap in 25.41 seconds.

In the feature race, Carr led briefly but was forced out by engine trouble.