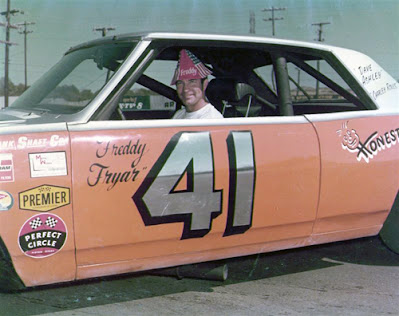 Shreveport, La. (June 21, 1970) – “I finally found the right combination of tires to be adaptable to the new asphalt,” commented Freddy Fryar.

“I’ve been trying to beat Derr for about six different races. It sure feels good to finally beat him.”

The time for the feature set a new national IMCA standard of 18 minutes and 43.13 seconds. Fryar also holds the 10-lap record.

Fryar said he wasn’t surprised that Derr didn’t deliver any pressure in Sunday’s feature. Derr had been experiencing tire trouble of his own throughout the 50-lapper.

The feature concluded the three phases of the IMCA Captain Shreve Trophy Series. Bud Carson, the owner and promoter of Mar-Car, Inc., of Oklahoma City presented the feature trophy to Fryar. However, on total points, Derr was the Shreve champion. Derr finished with 1,125 points to Fryar’s 1,035.

Fryar grabbed the feature lead on lap 4 with Derr right on his tailpipe. At times, the two drivers were side-by-side util Fryar stepped on the accelerator and pulled away to insure the verdict.

Fryar posted fast time in qualifying with a time of 22.19 seconds followed by Derr’s 22.23 seconds.

After the feature, Derr appeared to be concerned over his troubles. He commented that he “ran into rubber difficulty” and his tires were not acting as they should.