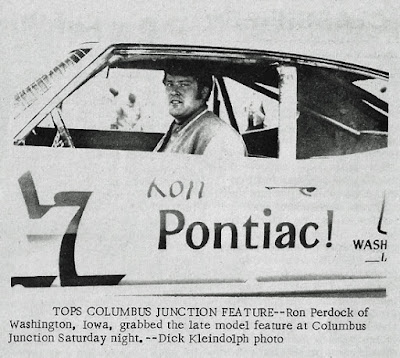 Columbus Junction, Iowa (June 5, 1971) – Ron Perdock of Washington, Iowa, took the lead from Mark Mosier, also of Washington, on the 14th lap of the 25-lap feature here Saturday night and hung on to win his first feature event of the season in the Mississippi Valley Speed Club races.

Mel Morris of West Liberty, Iowa, picked up the checkered flag in the first heat while John Moss of Iowa City, Iowa, grabbed the win in the second heat. Mosier score the victory in the third heat which saw Mark Colberg of Muscatine, Iowa and Walt Carney of West Branch bring out the red flag after the pair tangled on the first lap. Colberg was taken to a Muscatine hospital for a check-up following the accident.

Ron Jackson of Burlington, Iowa, won the fourth heat while Stan Crooks of Muscatine picked up the checkered in the 15-lap semi-main event.