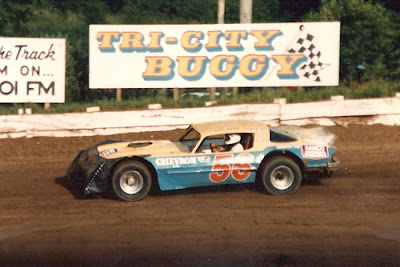 East Moline, Ill. (June 14, 1981) – If Davenport’s Gary Webb ever gets a complete day behind the wheel of a healthy race car, the results could be disastrous for his opponents at East Moline Speedway.

Webb, who first started his car at 5:30 p.m., Sunday after making some cam-shaft adjustments, saw it run well enough to capture the $1,500 first prize in the second annual Pabst Blue Ribbon 100.

Webb wasn’t seriously challenged for much of the second half of the race, maintaining a quarter of lap lead over Roger Dolan of Lisbon, Rollie Frink of Davenport and Ed Sanger of Waterloo.

Webb’s dominance was made evident by the way the field bunched up during one of the frequent red lights. Despite having other drivers pull on his rear bumper at the restarts, Webb continually stretched out a long lead within two or three laps.

“The car ran fine during the race – no problems,” he said in victory lane. However, things were different on Saturday night.

“Last night, we were running terrible, but we finished third, which made it hard to convince anyone of it.”

The weekend’s cloudy weather cleared for the start of the race, and the track looked hard and fast down the middle.

However, that didn’t seem to matter to Webb, who stayed high up on the banking through many of the turns and then dropped too the middle on the straightaways. The only time this tactic didn’t work was after a red-light restart on lap 53, when Dolan went low under Webb to take the top spot – but only for two laps.

Webb, thereafter, caught Dolan going too high in the third turn, dove low under him and stayed in first place for the remainder of the race.

Webb’s biggest competition might have been that which left earliest.

Mike Chasteen of Peoria, Ill., came off his pole position starting spot to lead the first 10 laps but was disqualified for having his car worked on during a red-light situation.

Webb’s car was so far ahead for most of the contest that the most interesting race was for second place.

From laps 78 to 84, Tom Hearst and Frink literally went bumper-to-bumper in the most exciting contest of the night. About 10 laps later, Sanger and Dolan were door handle to door handle, with Sanger edging ahead enough to capture runner-up honors but still finishing well behind Webb.

Because of Webb’s tremendous advantage, his main concern was keeping the car in one piece until the finish.

“I wanted the race to get over with,” he remarked afterwards. “I kept thinking, ‘if I could go faster, the race will get over sooner.’”