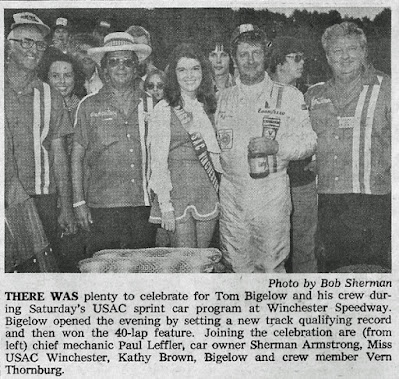 Winchester, Ind. (June 11, 1977) – Tom Bigelow combined a record-setting qualifying performance and a victory in the 40-lap USAC sprint car feature on Saturday night at Winchester Speedway to solidify his position at the top of the division’s point standings.

Bigelow started the evening by setting a new one-lap record for the half-mile, paved oval with a 15.689 second (114.730 miles per hour) clocking.

Bob Frey dealt Bigelow his lone setback of the evening by winning the first heat, but Bigelow’s second place finished earned him a starting spot in the 40-lap main.

Billy Cassella led the first 27 laps of the feature, but Bigelow took command on lap 28, and he was never headed.

Cassella came in second and was followed by Sheldon Kinser, who is second in the point standings. A pair of second-generation drivers, James McElreath and Dana Carter, placed fourth and fifth respectively.