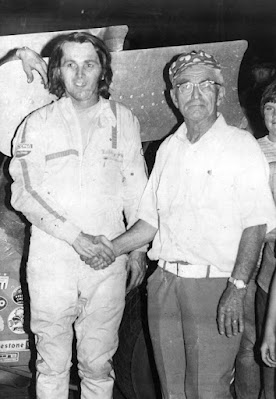 Jones won by three car lengths over Roger Larson of Solomon, Kan., in a record time of 10 minutes and 39.76 seconds for the 30-lap race on the half-mile dirt track.

Sutcliffe, shooting for his fourth straight feature win at Knoxville, charged to the front on lap 5 and stayed there until lap 15 when drive line problems forced him to the sidelines.

Jones took over from there and led the remaining 10 circuits for his first-ever victory at the historic track. He averaged 84.8 miles per hour to capture the $1,000 top prize before a crowd of 6,285.

His time broke the record previously held by Jerry Blundy of Galesburg, Ill., who finished third in the contest.