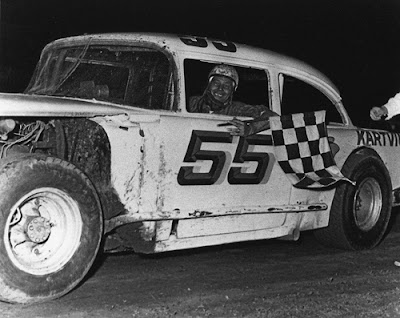 Vinton, Iowa (June 19, 1965) – Some 2,475 fans jammed into the Benton County Fairgrounds on Saturday night to watch Johnny Beauchamp of Atlantic, Iowa, win the second heat and the 20-lap modified feature.

The races were marred by a series of accidents, including a rollover that sent which sent Gordon Young of Vinton the hospital with a back injury.

John Connolly of Delhi and Lee Kunzman of Guttenberg were also heat winners in the modified division. The “A” semi was won by Les Johnson of Vinton and the “B” semi winner was Darrell Dake of Cedar Rapids.

Keith Knaack, the Mid-Continent Racing Association track manager, announced that an organization meeting would be set for Tuesday for a new “Cadet” class.